With 2020 we are going to look at a new aspect of programming: data structures. It is often the case that everyone uses structures provided by the various programming languages. The objective will be to have a general idea of how they work and their internal mechanisms. Often we will give a version not quite the same as the one actually implemented, but in the end we will still have an overview of how the structure works.

In particular, today we are going to deal with a rather difficult topic for many people: Linked Lists.

A Linked List is composed of nodes. A node is the set of data it must represent and the pointer to its next. This means that each node will have a field containing the address of the next element in the list.

Let's have a look to a picture: 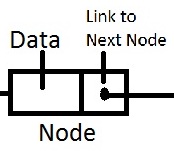 Let's see how the node is composed of a generic data field that represents all the information it should contain and a next field, which represents the pointer to the next node.

Why do we need the field next?

The idea is not to need a contiguous space in RAM, so you choose to allocate a number n of nodes where there is space available. We therefore obtain the advantage of a dynamic structure also from the point of view of memory occupation.

Implementation of the Node class

In this implementation we assume that the node information is a whole number. It can easily be replaced with more complex data types.

The class is very simple in its implementation, in fact it has only one constructor that only initializes the data field and sets the next default field to null. For completeness, I preferred to make the initialization of the next one explicit.

Let's go and see some operations that we can perform on the linked lists.

Let's understand better what happens. The insert method shown above performs what we call queued insertion, making the node to be inserted the last one.

In the case of an empty list, the node to be inserted becomes the head of the list, as well as the only node in the collection.

In the case of a non-empty list, you scroll the list until you find the last node. Then the next field of the last node is set with the address of the node to be inserted. In this way we will get a new list whose last node is the node we want to insert.

As far as printing is concerned, we'll just do a cycle that iterates until the elements to be printed are finished. At each iteration, we print the data field of the node being examined.

The idea is that, given the data to be removed from the list, we delete the first occurrence we find. We will follow the following steps:

Some deletion variants may result in deletion at the top, deletion in the queue or deletion at a certain position.

Let's see with a drawing.

We have briefly seen how a concatenated list can work. We note that the implementation provided is that of the Java language, but it could easily be converted to other languages that provide adequate mechanisms. Knowing the logic of how these structures work can be very useful when we have to do some rather complicated debugging.

In essence, this is one of those cases where theory comes to our rescue.

We love that our devices have hidden features. It's fun to learn something new about the technology we use every day, to discover those little features that aren't advertised by the…