Twitter had half a billion registered users who generate about 175 million tweets a day.

New accounts are being added at a rate of 11 per second.

Just how valuable are these proliferating 140-character messages?

Twitter now has more than half a billion registered profiles, with over 140 million in the USA alone. Also, Twitter users send 175 million tweets per day, on some special occasions and events Twitter generates tens of thousands of tweets every-second. The average Twitter user has tweeted 307 times.


The Pew Research Center says 8% of adults use Twitter on a daily basis. Another 7% use Twitter more sporadically. Twitter users have almost doubled since end of 2010. Alexa claims that an estimated 8% of global Internet users visit Twitter daily.

The most important tip for Twitter success is this: It takes time.

You can’t expect to throw up a Twitter account and get a lot of traffic in days, weeks or even a few months. Give it time. Feed it.

Be honest with your audience and have a consistent voice.

Focus on conversations, rather than on pushing your content or sales pitches out. Focus on getting to know the people who talk to you, and on letting people to get know you and your brand. Don’t treat Twitter like a direct mail campaign.

Treat it more like getting to know a friend.

And finally, have a system for figuring out what’s working and what’s not. Look at statistics, as well as follower surveys to improve your Twitter marketing strategy. 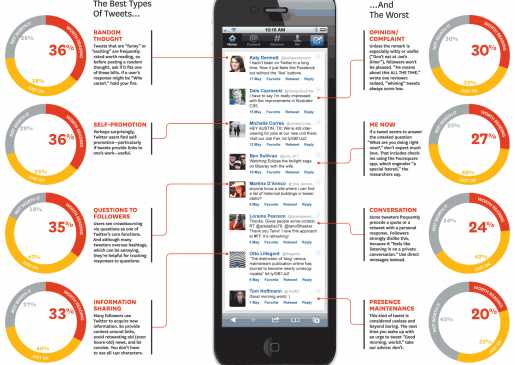 Pulsetuit, the new platform for sentiment analysis in real time

Alt17 has developed an innovative platform to measure the emotional impact in real time of campaigns, events, hashtags and Twitter users. Twitter is traditionally the most used social network to follow…

How to Become a Leader in The Field of Digital Technology

We think that a combination of quick response, easy use and functionality is what a company need in order to effectively run a social media campaigns. There are many tools that…

How Tos Tutorials and Instructions on using Bootstrap Articles CUSTOMIZING BOOTSTRAP Tips and recommendations on getting started with LESS and Bootstrap customization. TWITTER BOOTSTRAP TUTORIAL Up and running with Twitter Bootstrap in 20 Minutes ADDING…

How to create a Twitter proxy for mobile development

Since Twitter switched over to version 1.1 of the Twitter API, the first cause of developers headaches is the move to enforce OAuth for every API request, the second guilt -…

Bootstrap just cut a new release for Bootstrap 3, RC2. It's a big release as lots has changed, but that should all be for the better. From the official Blog: Key…

If you are developer, you must be aware of the bootstrap. If you introduce it to your website, your website’s popularity will get a boost for sure. Why? Because Bootstrap has…

In this article we have collected a selection of 14 wireframe and GUI templates that have all been designed for Bootstrap. They are in various formats (psd, ai, png…) and…

How To Rock Your Next Bootstrap Project

Bootstrap, released in August of 2011, it is still the most popular GitHub development project with over 52k stars and over 16k forks. Twitter’s Bootstrap helps you build beautiful web apps quickly.…

How to Retrieve Twitter Timeline and Hashtags in PHP

How to Retrieve Twitter Timeline and Hashtags in PHP (Twitter OAuth API 1.1) So, here we offer a guide that explains how to retrieve user timeline and hashtag with Twitter REST…

Wordpress WORDPRESS BOOTSTRAP THEMES Listing of free, base and premium themes for Wordpress based on Bootstrap. WP-BOOTSTRAP-GALLERY A custom Wordpress gallery for dynamic thumbnail layout using Twitter Bootstrap 2.2.2 thumbnails and the…

How many time do you spend on your social media accounts? Do you use it a lot to market your wares, services, sites, tools or yourself? Online presence is the key to small…

WhatsApp: How to View Deleted Messages

Words are carried away by the wind, as long as they are not written on WhatsApp. Sending it was like getting a tattoo, something you'll always like, or yet it'll…

Onion Search Engine: How to browse the Deep Web without Tor

The general recommendation does not change: Anyone interested in entering the Deep Web will get a more complete and secure experience by downloading a copy of the Tor Browser, and…

In this tutorial, we show you how to create CRUD application using vue js. here is very basic and simple example of vue.js crud app. using this vuejs crud (create read…

Problems with naming CSS classes I think I might not be the only one with this experience: after finally grasping all the important concepts regarding CSS I wanted to start giving…

How to use AdSense with Responsive Design

After some time publishing interesting information on your website, it is normal that you want to make a profit. One of the most widely used systems is Adsense, a Google…

Timelines are complicated but effective tools for showing large amounts of data. TimelineJS removes the pain TimelineJS (timeline.verite.co) is an easy-to-use JavaScript library, both for user and developer. It can be…