Today we are going to analyze one of the most used sorting algorithms: the Merge Sort. It is part of the Divide and Conquer family, just like the  Quick Sort. Merge Sort offers a better performance despite of the Quick Sort since its complexity remains O(n log n) keeping performances. It is also called "algorithm by fusion"

The main defect of the Merge Sort is that it needs auxiliary data structures in order to execute its tasks. We can say that it is a stable and adaptive algorithm, but it is not in-place.

How does it work?

Let's start looking at an image that explains very well how the algorithm works. 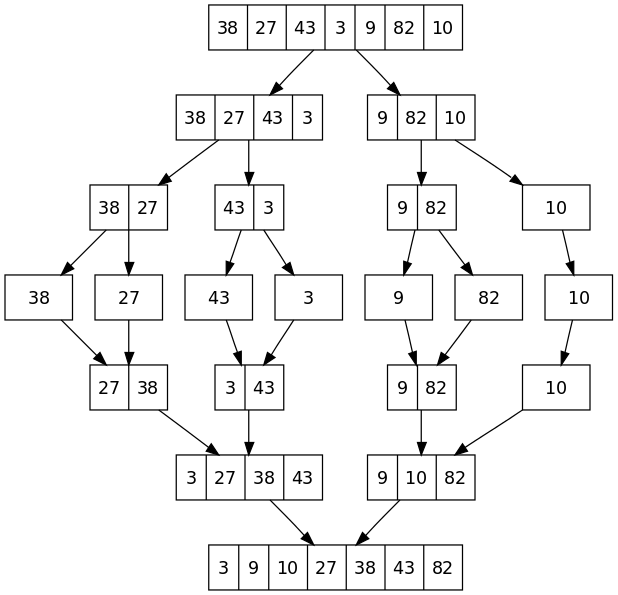 If someone has already had to deal with large collections of data to order, the way of working of the algorithm may be already known. The basic idea is the one of dividing the array into small groups and sort them. Once the sorting operation of every subset is completed the minimum element among the elements is taken and it is put into the final array. The process is repeated until every subset contains at least one element.

The foundamental problem is the fusion process.

First of all, some precisation. When we write a for cicle we can omit the curly brackets if the body of the cicle contains only one instruction. In this case, in the two for cicles written above the curly brackets can be omitted since there is a single instruction and there will not be any problem about the extension of the code.

Complexity of the fusion process

The complexity of the merging process has a linear growth, in fact at each iteration the final array's size always grows by 1. So it is O(N).

There is starting cost of O(N) for the copy of the auxiliary array.

When can Merge Sort be useful?

Merge Sort can be useful expecially when we deal with Linked Lists just because the insertion process has linear complexity. Because the nodes of the list are not adjacent, it is particularly convenient to use this algorithm. This is the most significant situations, but this is not the only one.

Hello everyone and welcome back! The previous times we have introduced the concept of variable, trying to define some basic concepts about it.  However, some situations suggest that the concept of…

In this short series of articles we will go to see how it is possible to create the Hashmap data structure in C. In the implementation we're going to use the…

With 2020 we are going to look at a new aspect of programming: data structures. It is often the case that everyone uses structures provided by the various programming languages.…

Today we are going to write about Regular Expressions known as regex or shortened  regexp, a very useful concept of using search patterns. Surely you were in a situation when you…