What Is The Origin of The Word Spam?


It is 40 years since the first spam e-mail was sent.

Surely most of the readers of this blog had not yet been born, as well as annoying mail with which we are bombarded in our emails, social networks, or mobiles already existed long before our existence.

Have you ever wondered what the origin of the word "SPAM" is and why it is used to refer to spam?

If you are using email marketing to get closer to your customers and promote your products and services you need to know where this term comes from and everything about this great marketing tool.

A tool that, if well used, can generate great profits in your business but, on the contrary, if you misuse it, it can damage the reputation of your business forever and end up being perceived as annoying and an "unwanted" company.

But let's start from the beginning.

Although it is believed that the first Spam actually dates back to 1864, when the first unsolicited message was sent via telegraph, it was on May 3, 1978, when the first spam message in history was sent.

In 1978, Gary Thuerk, a marketing manager, also known as the father of spam, sent a message to nearly 400 ARPANET users about a new model of computer, as they had not sold computers for a long time, and began to think what he could do to get their attention. He thought of searching the directory for the users' email addresses, and without thinking about the consequences, he copied the addresses one by one with the product manager Carl Gartley, and sent them, thus becoming the first electronic spam.

When it happened, the phenomenon had not received a name, but this episode appeared in a Monty Python sketch that made it popular.

Anyway, the real origin of the name goes back to World War II, when American soldiers received canned food called Spam, which was and is very popular today.

In fact, the word SPAM first appeared in 1937 as the name of a canned product manufactured by the Hormel Foods company. Founded in 1891 in Austin, Minneapolis (USA). 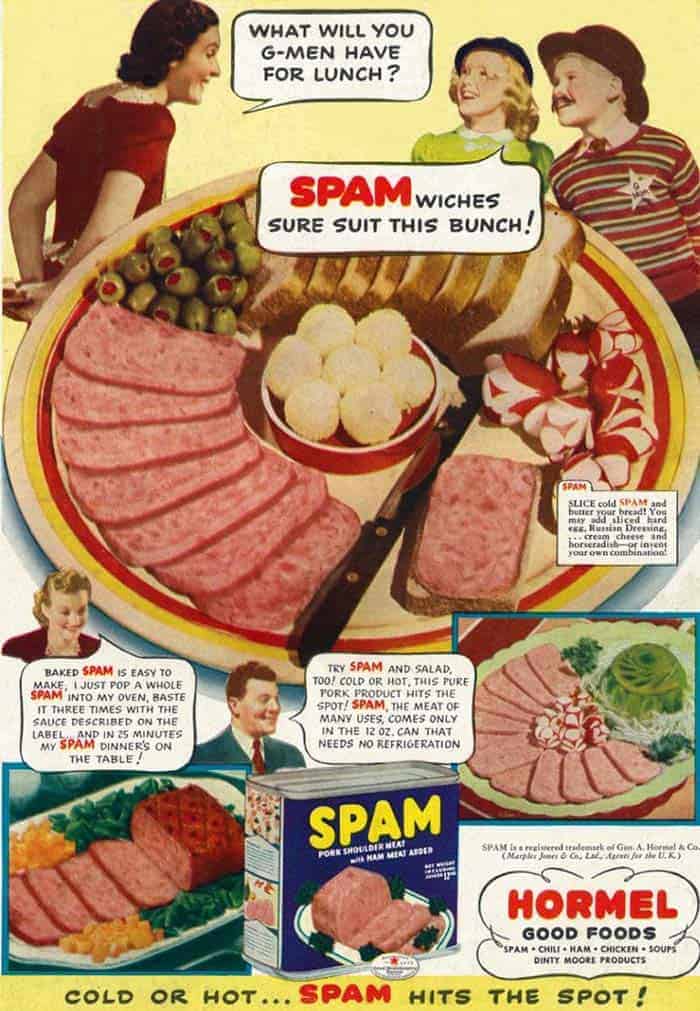 This product was composed of spiced pork and was started to be produced in response to the great demand for ready-to-serve food. We were beginning to demand fast food and time-saving meals on a daily basis.

It should be noted that we were at the beginning of the demand for canned food as the lifestyle was changing by leaps and bounds.

This company made millions with this product that came at just the right time and anchored itself in consumers' minds for decades.

When did it come to be used to label something "heavy repeated," and "annoying"?

Returning to the above-mentioned fact, Thuerk, affirmed that his action generated profits of more than 12 million in sales, although his email caused many complaints to the Department of Defense of the United States, on the part of the users who received the spam.

But when was this "spam" madness used to call in unwanted mail or any advertising that was not accepted?

Well, it turns out that in 1979, Mr. Tom Truscott and Jim Ellis, two of the first computer scientists in history, created a global discussion network called the Usenet (Users Network) at Duke University in the United States.

This network was used internally by academics and then expanded as a pioneer in computer communications. Just as it is now with email.

These messages that were broadcast between the computers were called NEWS. Here's a screenshot. 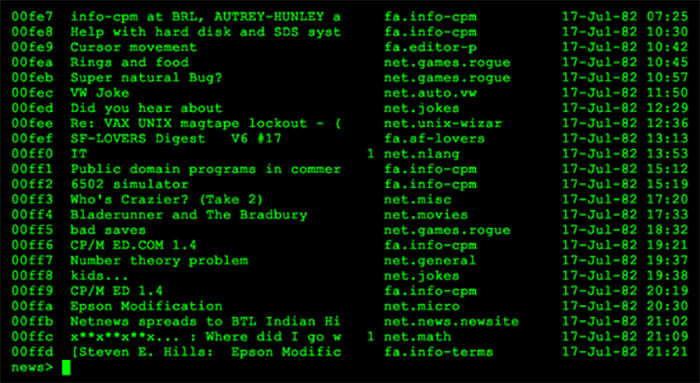 That's when the first "HEAVY" people began to appear who used this wonderful communication tool to send advertising, promotions, "business" opportunities, etc. to other people within the same network.

This network full of "wonderful geeks" with amazing occurrences and making use of the memory of the Monty Python sketch (the word "SPAM" had already been anchored for something heavy and repeated) began to call every message of this type "SPAM".

Curiosities about the evolution of Spam:

1993: Richard Depew, tried to implement a moderation system in the Unsenet (public discussion forum) with the aim of eliminating a post, ended up making a mistake and his software ended up publishing a bug that meant that more than 200 messages were sent in one of the groups.

1994: Spam became a mainstream in Unset. That is, Internet users began to receive messages such as "Green Card", messages indicating that you had won the lottery or "Global Alert: Jesus is coming".

2003: USA, approved the Can-Spam, a regulatory law for commercial emails, in Spain the law in charge of regulating the Spam, is the Law of Services of the Society of the Information and Electronic Commerce of 2002, in its article 21.

Today, the fight against spam has only just begun. In recent years, technologies have been generated to avoid them, such as SPF, DKIM, DMARC, among others.

It is estimated that more than half, about 66% of the emails we receive either in our emails, mobile phones or social networks are Spam, and has become, along with human vulnerability in the main channel of attack of companies.

How to comply with Google's quality guidelines in 2020

Google provides a set of guidelines on what your website's content should look like in order to appear in search results. There are several categories within the Google guidelines: Webmaster Guidelines. General guidelines. Content-specific…

5 Remote Careers You Can Start Online in 2020

In 2020, life has moved indoors. School, shopping, entertainment, and work have all moved online to keep up with the fight against COVID-19. And with it came an enormous demand…

Get ready for the future: What Does The Future Of SEO Look Like?

How will SEO change in 2030? There are various positions and assumptions that we can make about this so that you can think about the strategies to take when the…

Your web is the site where most individuals will connect with your business. Your digital marketing processes will most probably send customers to your website. It might be to get…

7 Most Effective Ways to Make Money From Photography

Many people all over the world enjoy photography. At first, it may seem difficult to learn, but once you turn it into a hobby, then it becomes a pleasure rather…

The most popular social media platforms boast of having hundreds of millions of active users every month. The number itself is more than enough to attract brands in trying to…

How to Build a Successful E-Commerce Store

Launching an e-commerce store is a popular route for entrepreneurs to take. The thought of opening a physical retail outlet isn’t very appealing in 2020, but here’s what you need…

Online Marketing Strategies for your Ecommerce

The impetus and desire we have to launch our online store can be counterproductive if we have not defined a pre-launch strategy. If we are determined to launch our ecommerce…

How to Improve Your Website to Attract Local Customers

If you run a small business, make no mistake: local search is imperative for your success. You might have lofty dreams of attracting the world to your website, but it’s…

How to Write an Amazon Listing That Converts

If you are one of the 2.5 million sellers on Amazon, you’ll know that the platform has incredible potential for profits. However you’ll also know the competition is fierce and you need to…