The user experience design of a product essentially lies between the intentions of the product and the characteristics of your user.

The task of building a culturally appropriate website for a new market can be challenging:

in this article we are going to talk about the impact of national culture of people’s behavior, and try to understand the reasons why - for example - the use of speech balloons in comics may be confusing to a rural audience, or why East Asian designers seem to make a greater use of images in comparison with Northern European or Anglo-American designers; but first, let’s get acquainted with the concepts of culture and cultural dimensions.

According to social psychologist Geert Hofstede culture can be defined as “the collective programming of the mind which distinguishes the members of one group or category of people from another”, while the cultural dimensions theory is a framework for cross-cultural communication he developed and refined over the years.

The dimensions of national culture included in the framework are:

-Individualism versus Collectivism (IDV), “related to the integration of individuals into primary groups”;

-Power Distance (PDI), “related to the different solutions to the basic problem of human inequality”;

-Uncertainty Avoidance (UAI), “related to the level of stress in a society in the face of an unknown future”;

-Masculinity versus Femininity (MAS), “related to the division of emotional roles between women and men”;

-Long Term versus Short Term Orientation (LTO), “related to the choice of focus for people's efforts: the future or the present and past”;

-Indulgence versus Restraint (IND), “related to the gratification versus control of basic human desires related to enjoying life”.

Other cultural factors worth mentioning for the purpose of this article are those theorized by anthropologist Edward Hall, namely:

-Proxemics, thestudy of the nature, degree, and effect of the spatial separation individuals naturally maintain (as in various social and interpersonal situations) and of how this separation relates to environmental and cultural factors.

With regard to web design and cultural factors, a 2008 studyon Social Interaction Design in Cultural Context claimed that “in the cross-cultural comparison of web pages, there are three essential variables–information context, cultural values, and creative strategies–which seem unavoidably to be related to cultural contexts and to be factors that determine whether web pages can be accepted and accessed by target consumers”, and concluded thatmultinational companies “lack standards with regard to matching different cultural contexts”.

In relation to cultural context (the type of context that  encompasses all aspects - both conscious and unconscious - of a culture), further research on Australian, Chinese, and Saudi Arabian design preferences found that:

- users from low-uncertainty avoidance countries, who are tolerant of risk and uncertainty, tend to prefer less control in navigation;

- users from low-context cultures and short-term orientation cultures prefer navigation structures that are simple and characterised by quick navigation;

- the overall usage of colour differs between cultures “Linguistic relativity and color naming across cultures” for further details on this point];

- images of leaders, elderly individuals, larger groups, as well as political or religious images, and group achievements are popular in Chinese and Saudi Arabian websites. The heavy use of these types of images can be related to the high-power distance and collectivistic culture of the Chinese and Saudi Arabian cultures, as described by Hofstede, Hofstede, and Minkov.”

Finally, let’s look at some concrete examples of cultural issues that might impact website design, provided by the World Wide Web Consortium (W3C):

1. On how terms or labels can be of widely differing lengths in different languages. 2. On formatting and reading data (“Russian and Japanese addresses are written from the general to the specific, top to bottom. You may need to figure out how to produce these different orderings for forms. Also, the name of the Russian person above is in the dative case (expressing the idea of 'to the person'”). 3. Symbolism and examples (“This check symbol means 'correct' or 'ok' in many countries. In some countries, however, such as Japan, it can indicate 'incorrect'. Japanese often convert check marks to circles (their symbol for 'correct') as part of the localization process.”). 4. Color (“Wearing a black dress for a wedding is not the issue in Japan that it might be in the UK”). 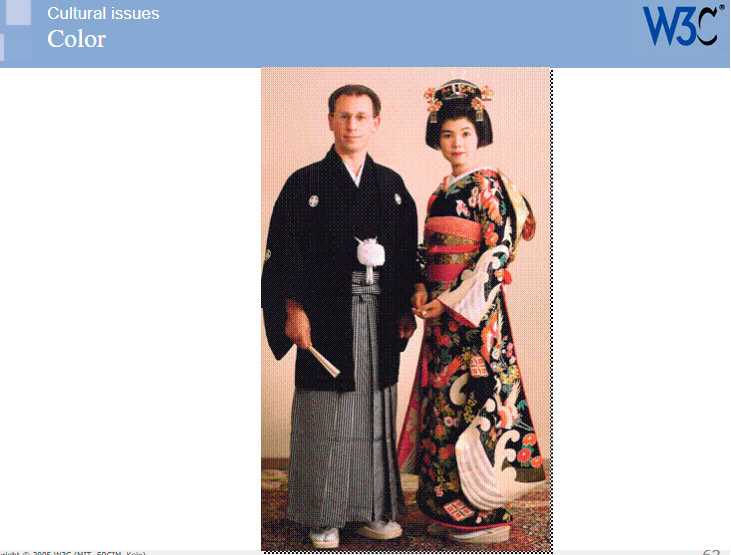 To conclude, when it comes to web design, together with “obvious” differences in language, currencies, and measurements, other subtle (and often “implicit”) differences in users’ cultural background must be taken into consideration in order to appeal to the target audience.

(*) A joke on the importance of language in cross-cultural communication and design:

A disappointed salesman of Coca-Cola returned from his assignment to Saudi Arabia.

A friend asked, "Why weren't you successful with the Saudis?"

The salesman explained, "When I got posted, I was very confident that I would make a good sales pitch.  But I had a problem. I didn't know how to speak Arabic.

So I planned to convey the message through three posters:

First poster : A man lying in the hot desert sand totally exhausted and fainting;
Second poster : The man is drinking Coca-Cola;
Third poster : Our man is now totally refreshed.
And then these posters were pasted all over the place."

"Terrific! That should have worked!" said the friend.

"The hell it should have!" said the salesman. "No one told me they read from right to left!"

5 ways to improve your user experience

As a brand, UX is incredibly important when it comes to keeping your customers happy and on your site. Afterall, the longer they are on your site, the more likely…

The viewport is the area where the browser renders the site. This is your screen minus the reserved space of the browser chrome. Sometimes you want to size an element…

Film and graphic lovers rejoice! Today we give us this little pack film effect Photoshop actions!  Photoshop actions allow designers to automate common sequences for increased efficiency. If you do much…

My grandmother always says, “Nothing in life is free.” In a way, she was correct. Even (some) Google products – considered free – are ad-supported.  Freebies be it any kind of…

Nowadays static maps (drawn by the guy who works at the ‘art department’) aren’t really used anymore. Using google maps allows you to zoom in/out, get directions,  have a satellite…

On December 4, 1995, JavaScript was announced in a  press release by Netscape and Sun. The press release leads with this title: NETSCAPE AND SUN ANNOUNCE JAVASCRIPT, THE OPEN, CROSS-PLATFORM OBJECT SCRIPTING LANGUAGE…

In today's post we bring together thin fonts which are really popular among designers.The below fonts are all free both for personal and commercial use. So why not download the ones…