On December 4, 1995, JavaScript was announced in a  press release by Netscape and Sun.

The press release leads with this title:

The subtitle may have been better still:

Netscape and Sun aren't with us any longer, but JavaScript is most definitely still with us. Its original parents had absolutely no idea what they were doing or what JavaScript would become.

1995: JavaScript announced by Netscape and Sun. The language went through the names "Mocha" and "LiveScript" during development, and the person responsible with creating it was Brendan Eich, now CTO at Mozilla.

1997: The first edition of ECMA-262 was adopted by the Ecma General Assembly

2000: The rewrite of KHTML is completed, ancestor of WebKit and Blink. On October 23, 2000 KDE 2.0 is released, including KHTML for the first time.

2001: Internet Explorer 6 is released, the last major version of IE for 5 years. Today, the majority of IE6 users that remain are in China

Also 2002: Initial release of what would become Mozilla Firefox.

2004: GMail released, starting the AJAX and "Web Application" era. Its release on April 1 leads people to believe it may be a prank.

Also 2004: WHATWG is formed to accelerate the HTML standardisation process.

Also 2005: Jesse James Garrett releases a white paper in which he coins the term 'Ajax'.

2007: Douglas Crockford delivers a keynote called JavaScript: The good parts. That would become a book by O'Reilly in 2008.

Also 2007: Leonard Richardson and Sam Ruby write the book RESTful Web Services, that turns the tide in favour of HTTP and against the WS-* set of specifications, also known as WS-DeathStar.

2009: Ryan Dahl releases node.js, which would grow to dominate the Server-side JS ecosystem.

2010: The beginnings of the modern JavaScript library ecosystem: NPM,BackboneJS, RequireJS.

2011: Javascript a first-class citizen in Windows 8

2013: Firefox OS, whose UI layer is written exclusively in JS, is released. In possibly related news, asm.js is also released in Firefox by Mozilla.

Also 2013: The first Nodebots event is held in San Francisco.

We can notice that JavaScript's progress in a way that admits less subjectivity. That is performance, ecosystem size, and adoption.

This chart shows performance on the Kraken benchmark, for browsers from Firefox 3.5 to Chrome 23, on the same hardware. 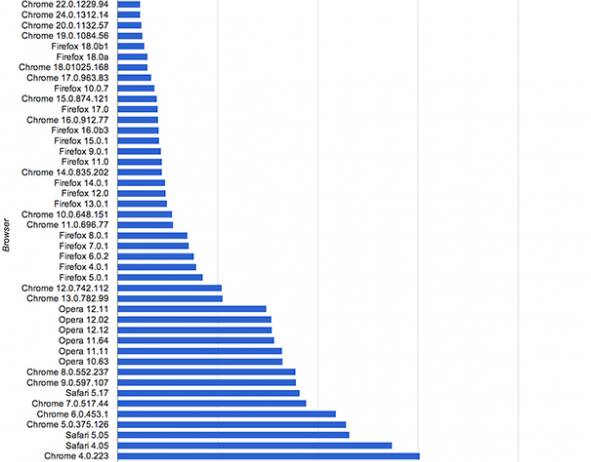 The whyeye.org website that did this work seems to have been taken offline, but archive.org has preserved the original page. 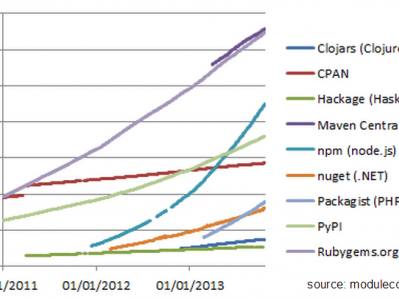 Observe how NPM (everyone knows NPM is exploding) is the only one with an accellerating rate of increase in packages.

It can be said that JavaScript has supplanted Ruby as the language of choice for the plurality of new projects. 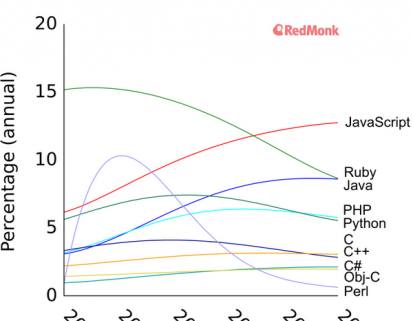 And now? What next for JS?

For an image format that features infinite scalability, SVG can be a surprisingly difficult format to make responsive: vector images do not adjust themselves to the size of the viewport…