One of the most popular patterns is the Strategy Pattern. It is also one of the easiest patterns.

It is a member of the behavioral patterns family, it has the duty of managing algorithms, relations and responsibility among classes. The GoF defines it as follow:

It defines a series of encapsulated algorithms that can be exchanged for specific behaviors. 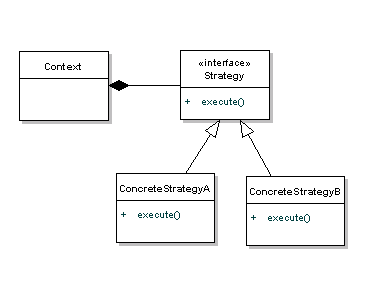 We can notice that the Context, which can be imagined as every entity that need a "dynamic" behavior, is composed of a Strategy.

Why is Strategy an interface? Because the ConcreteStrategy will implement this interface so, when we will decide to change the implementation of the concrete classes, the Context's structure will not change.

Speaking about classes that are already present in some Java libraries, the java.awt.Container components are an example of Strategy Pattern, in fact the LayoutManager acts as Strategy class and the classes like BorderLayout and FlowLayout implement LayoutManager, implementing the method addLayoutComponent(). The different implementations differ in the way and position of the object that will be placed in the container. The Container class contains the LayoutManager object.

Let's look in details every component of the pattern.

Let's try to understand the structure of the pattern.

I want to precise that I am showing a general structure and the interface has only one method so the concrete classes will overwrite only one method. The pattern can be extended by exposing more than one abtract method and the way of working will remain the same. The code would be longer, but not necessarily more complex.

Let's look to a scheme that shows how a client puts into action the Strategy Pattern:

Here is an example that uses some different sorting algorithm applying the Strategy Pattern.

Why sould you use the Strategy Pattern?

Sometimes we can have very complex situations where using inheritance mechanisms would generate very long and complex hierarchies. This pattern allows us to reduce considerably the complexityof the code. On the other hand, every client that uses the Context class must know the best Strategy to use.

Someone could ask spontaneously: "you showed me a canonical example with sorting algorithms. Where is it used practically?".

The use cases are manifold. We can think of data compression software, which allow us to choose between different compression formats. Another example is a payment platform where you can hypothetically choose the payment method to be used and so on.

These cases, like many others, use the Strategy Pattern.

We must precise that in a lot of cases organizing very well the pattern could not be trivial.

Ultimately, we have defined a general structure of the model, giving the general construction of the various components and then giving a practical example.

In my opinion for any programmer who wants to approach a professional programming this is a pattern that must be known. It allows us to linearize so many situations that taking advantage of the common mechanisms that we are sometimes taught in high schools, such as heredity, would be much more complicated.

Talking a llittle bit about theoretical computer science, this pattern uses the mechanism of polymorphism made available by the presence of the interfaces that we use as Strategy. The importance of having a generic interface, as told before, is to be able to change the behavior of ConcreteStrategy without changing the structure of the class itself, in fact we also take advantage of the possibility of having an apparent type different from the real type of the class. In fact, as we know in Java it is legitimate to declare, for example, an arraylist like:

This principle is used when we declare a Strategy object in the Context and then we instantiate as instance of a ConcreteStrategy that implements Strategy.

Ultimately, as said before, it is something to know, which can be really useful in many situations.

How to Pick the Best Macbook for Graphic Design Work

Graphic designers tend to do the majority of their work using a graphics tablet. However, a computer is still something you need. The idea is that you are bound to…

Parenting, pandemic and UX: Learning from design of experiences

After the quarantine, many of us have had to adapt our work and personal routines to the new remote paradigm. As a mother, I decided to share some things I've learned. We've…