Programming, the need to order the collections of data or objects that must then be manipulated often arises. Ordering a list can be useful in cases where you have to do very quick searches. We will see later on how to maintain an ordered list is useful to carry out dichotomous searches and therefore have the results in a clearly lesser time compared to a sequeial search.

In this article we will refer to arrays composed of integer numbers. The algorithm is the same for every data type.

This is a speech that I do now and it is the same for every algorithm that we will study in the next articles.

Generally, every algorithm has properties that are useful in order to study them and above all, usefull to decide what algorithm is the best for the situation that is been considered. Let's see better.

An algorithm is called stable if it preserves the relative order of the data with identical keys within the file to be ordered. For example, if we are looking at a list of people sorted in alphabetical order, a stable algorithm will always return an ordered list in alphabetical order. If the algorithm were unstable, a list would be obtained without any trace of the previous ordering.

A possible way to force the stability of an algorithm is the one of adding a unique key for every element. This principle is similar to one rule of database design.

An algorithm is called in-place if it uses a constant number of variables to sort the array and it doesn't uses auxiliary arrays.

An algorithm is called adaptive it if gains advantage from the elements that are already sorted.

Let's analyze better some implementations of a sorting algorithm: the Bubble Sort.

The algorithm's name comes from its behavior. In fact the elements of the vector behave exactly like the bubbles in a glass of champagne: the larger ones rise upwards while the smaller ones remain at the bottom, exactly as shown in the gif below. 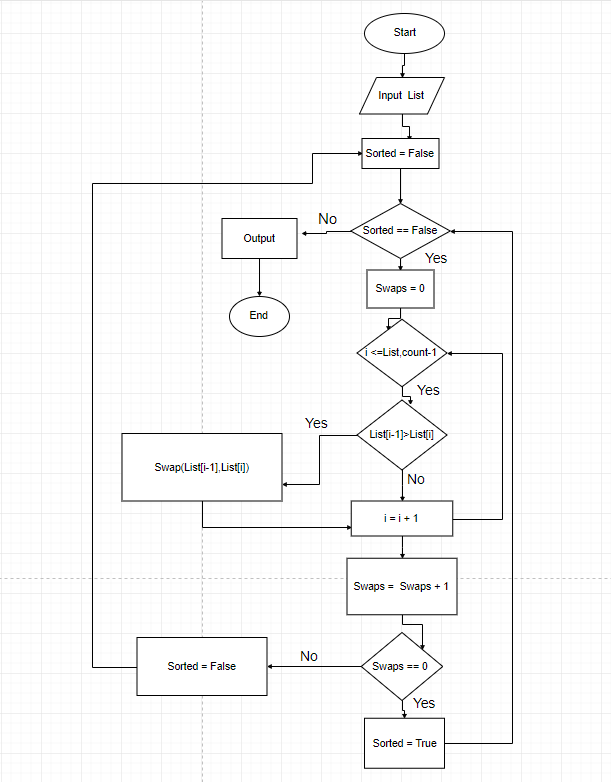 The flow-chart shows an optimized version of the algorithm, while the code shown below presents the classic version.

This iterative implementation shows the exact procedure shown in the gif. In fact, printing step by step the various states of the array during the sorting process, we obtain:

We can notice that the number of iterations needed to sort a short array like the one shown above is very high. Because of this the Bubble Sort is used basically for educational pourposes because of its inefficiency. Thanks to the predisposition to didactic uses, we are now going to provide a recursive implementation of the same algorithm, defining with swap the method that exchanges two positions of the same array.

The obtained result is the same, but the way it is realized changes.

Carrying on the speech about the properties done before, we can try to identify what are bubble sort's properties.

The Bubble Sort is stable, in fact it always returns an array sorted in ascending or descending order regardless of the data in the collection.

It is also in-place since it doesn't uses and addictional arrays for the sorting operations.

It is also adaptive, in fact when the elements are sorted, the algorithm doesn't perform any operation and keep them sorted. This feature saves a considerable number of iterations.

Making a more mathematical speech, let's see something about the complexity of the algorithm. Let's make a small introduction. Complexity is indicated by the so-called Landau symbols, used to compare the progress of two functions. In fact, we tend to associate the complexity of an algorithm with a function, to then compare it to a note.

In the worst case we have a complexity of T(n)=n(n-1)/2  —> O(N²) while in the best case the array is already sorted and the number of iterations is 1.

On average, it performs around N2 / 2 comparisons and as many exchanges.

A first way to optimize the algorithm is based on the fact that if in a certain iteration n no swaps are done, the array is sorted and then the algorithm can end. We use a boolean variable that check this condition. This kind of optimization is the one shown in the flow-chart above.

A second line of thought argues that if a given iteration does not move any element of position greater than a given value i, then you can easily demonstrate that no subsequent iteration will perform swaps in positions subsequent to that value i. The optimization consists in storing the index where the last exchange took place and scanning the array up to that value location. Even this technique obviously introduces a small overhead.

But it has also some good points. In fact it is easy to understand and implement, it does not require a large amount of memory and the most important thing is that, once the sorting is finished, the data is ready for processing.

Hello everyone and welcome back! The previous times we have introduced the concept of variable, trying to define some basic concepts about it.  However, some situations suggest that the concept of…

In this short series of articles we will go to see how it is possible to create the Hashmap data structure in C. In the implementation we're going to use the…

With 2020 we are going to look at a new aspect of programming: data structures. It is often the case that everyone uses structures provided by the various programming languages.…