Going on with the speach about design patterns started previously, we are going to talk about another pattern often used: the Factory Method Pattern.

The GoF (Gang of Four Design Patterns) defines it in this way:

It defines an interface to create objects, but leaves to the subclasses the decision about the type of the class to instantiate.

Starting from the definition, we can see that the problem regarding the inheritance among classes discussed for the Singleton Pattern is no longer present. In fact, we decide to use the Factory Method Pattern when we are not able to know the exact type of object to be created beforehand or when we want to delegate the task of creating objects to other entities

In the majority of the books about this topic, the pattern is represented using an UML diagram like the one below: 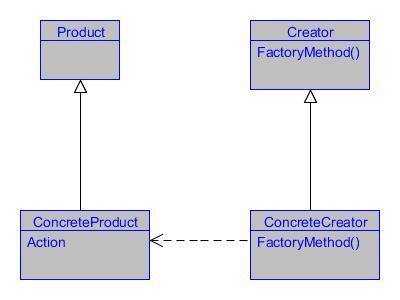 The first observation, even if trivial, is that the implementation is definitely more complicated than the almost elementary one of the Singleton.

Starting from an elementary example, let's define a CatFactory:

Every returned element from the factory has to implement this interface.

The foundamental concept of this pattern is the fact that every concrete class is a derivative of a basic type. In this case, every class implements Cat.

The element to which the creation of objects is entrusted is precisely the so-called Factory class, which will have a static method with this functionality inside.

Let's see how this class could be implemented:

We can notice that the code of the Factory class is quite easy, because it accepts only three strings. In a hypothetical real situation, the code would be longher and more complex, but this one is sufficient to give an idea of how the pattern works.

The Factory Method has different advantages and disadvantages, such as:

Why use the Factory Method Pattern?

As I told before, there are different situations where we can't know before what the concrete type of the objects that will be instanciated. But the problem is much more bigger.

We could run into cases where we know the exact type of objects, but the latter may change in the future. So the client is free from the burden of knowing what kind of objects has to instanciate and the pattern returns an abstract object which is then realized through the classes inherited from the abstract entity. The client often guides the creation of the object, as in the example shown above, but ignores the details of its construction.

It could sound strange, but the Iterator pattern can be assimilated to the Factory Method family. In fact Iterator allows us to access sequentially to the elements of a list, relieving the caller of the need to know what the instantiated classes are.

Iterator is an interface that exposes three methods:

Let's look at an example:

We will obtain as output:

Java makes available a class called ListIterator that allows to scan objects collections in both directions, from the head to the tail and from the tail to the head.

We use the Factory Method Pattern when:

Focusing on some implementation details:

Typically the Factory Method Pattern is used to create Logger and other softwares of this kind.

In this article we will talk about Privacy Policy statements, how you can write one and implement it on your page. WHY DID IT POP UP? These days when we browse on…

How to Pick the Best Macbook for Graphic Design Work

Graphic designers tend to do the majority of their work using a graphics tablet. However, a computer is still something you need. The idea is that you are bound to…

Parenting, pandemic and UX: Learning from design of experiences

After the quarantine, many of us have had to adapt our work and personal routines to the new remote paradigm. As a mother, I decided to share some things I've learned. We've…

In this article we will talk about Privacy Policy statements, how you can write one and implement it on your page. WHY DID IT POP UP? These days when we browse on…

How to securely access the Dark Web in 15 steps. First part

The dark web can be a pretty dangerous place if you don't take the right precautions. You can stay relatively safe with a good antivirus and a decent VPN. However,…

How to Browse the Internet Anonymously: 6 tips

Most of the actions you take online are not as private as you might imagine. Nowadays, countless people and groups try to follow our online behaviour as closely as possible. Our…