We often speak of discrepancies between

But more often than not, we still see developers struggling to fully grasp the idea of how everything works.

That's because concepts are rarely visualized.

Not all scopes are identical. Do not memorize scope rules for each type of scope. Try to figure out why this actually works. (e.g. variable privacy.)

Let's begin with the block scope - the most basic of all. Actually only { } brackets form a block scope. They can be placed anywhere in your program. This does not often happen, because usually { } is used for - loops, functions, classes, etc. However, a simple vanilla scope can be:

All variables defined in Global Scope become available in all block scopes and can be used there.

Variables defined with var inside a block scope are “hoisted” back into the global scope… but the actual value is not hoisted only its definition.

When that happens the value becomes undefined.

A trip from global scope into function scope is a one-way street:

Hints Of The Closure Pattern

Functions allow closure patterns because their variables are hidden from the global scope, but can still be accessed from other function scopes within them:

The idea is to protect variables from the global scope, but still, be ready to call the function. In just a moment, we will take a closer look at this. Protecting variables from outside the scope helps to reduce bugs in the long run. You may not see it immediately.

But if you stick to this idea, you will avoid causing bugs in the future that don't really have to happen.

There are no differences in global scope. With too many differences between "var, let and const" tutorial headlines, it is easy to believe that the three are totally different. But that's not always true.

When variables are defined in global scope… there is no difference between var, let and const in terms of scope visibility:

Keywords let and const limit variable to the scope in which they were defined:

Variables defined using let and const are not hoisted.

Though, all variable types, including var, remain limited to their scope when it comes to functions:

You cannot access variables outside of the function scope in which they were defined regardless of which keyword was used.

Part of the function closure pattern is a function trapped inside another function. In the next example the inner function returns the counter variable. defined in an outer function. But because add() is a function it never leaks into global scope. You can think of it as a closure container.

But just a visual concept won’t be enough here. What does a closure actually look like in code? Basically, it’s a self-calling function wrapper:

First, an anonymous function is created and called at the same time:

The second parenthesis in (func(){})() ← execute the function soon after its defined all in a single JavaScript statement. And there we have it.

Why Are We Doing This?

Take away: Global Scope cannot access nor modify the counter variable at any time. The closure pattern allows its inner function to modify the variable without direct access to it from Global Scope…

The whole point is that Global Scope does not need to know or understand how the code inside add() works. It only cares about receiving the result of add() operation so it can pass it to other functions, etc.

Closures are no longer as popular as they used to be. They were invented in the pre-ES6 era. Their functionality will be replaced in the future when private variables are added to the definitions made with class keyword.

So why did we even bother explaining them?

This is also sometimes called encapsulation - one of the key principles of object-oriented programming, in which the internal functions of a class member method are hidden from the environment from which they were called.

It provides automatic privacy for variables defined within the confines of block-level scope. Variable privacy is a feature you will encounter in many programming languages.

The  let  and  const  keywords conceal variable visibility to the scope in which they were defined and its inner scopes.

Scope visibility differences surface when you start defining variables inside local block-level scope or function-level scope. As we have seen earlier in global scope there is no difference.

The class scope is simply a placeholder. Trying to define variables directly in class scope will produce an error:

Here are the proper places for defining local variables and properties.

In classes variables are defined inside its constructor function or its methods and attached to the object via this property: 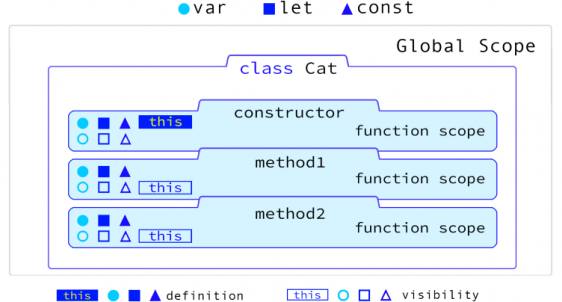 The this Keyword In Class constructor Function

The keyword is used to define object properties. Once defined in constructor they become available for access in all class methods via this keyword (a reference to an instance of that object).

Local variables can be defined using var, let or const keywords, but they will
remain limited to the scope of the constructor or the method in which they were defined, without actually becoming properties of the object.

The constructor and methods are still technically just function scopes. 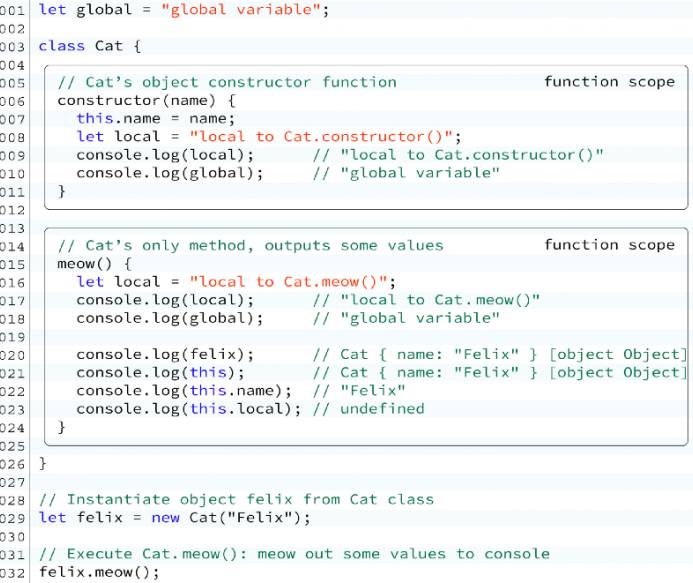 Dissecting a class: constructor and a method meow(). There is only one constructor that creates the instance of the object. But you can have as many methods as you want. Think of methods as actions your class can do.

For a cat it could be: meow(), eat(), drink(), sleep(). Which actions should your class have? It depends on the purpose and type of the object your class defines.

It’s an abstract model. You are the designer of your class. Go crazy.

Note that because felix object was actually created in global scope, you can access it within the class methods (but not in class constructor, because in constructors the instance of the object is still being instantiated.)

But why use felix inside meow() class when we can simply use this keyword to refer to the same thing? It was just an example.

The const keyword is distinct from let and var.

It doesn’t allow you to re-assign a previously defined variable to a new value:

It’s still possible to change values of a more complex data structure such as Array or objects, even if variable was defined using const. Let’s take a look!

Changing a value in the const array is still allowed, you just can’t re-assign the object to a different array:

You just can’t assign a new value to the original variable name. Once array always array. Or once an object always an object:

When it comes to object literals, the const only makes the definition constant.

But it doesn’t mean you can’t change values of the properties assigned to a variable that was defined with const: