The command line interface (CLI), or Terminal is considered by many to be the Holy Grail of computer management. At one time the CLI was the only way to accomplish anything on a computer; then, the CLI gave way to the graphical user interface (GUI) as the popularity of PCs increased.

Mastering it can have a very positive effect on your workflow, as many everyday tasks get reduced to writing a simple command and hitting Enter.

In this article we've collected some Unix commands that will help you get the most out of your terminal. Some of them are built in, others are free tools that are time-tested and can be installed in less than a minute.

Curl is a command line tool for making requests over HTTP(s), FTP and dozens of other protocols you may have not heard about. It can download files, check response headers, and freely access remote data.

In web development curl is often used for testing connections and working with RESTful APIs.

Tree is a tiny command line utility that shows you a visual representation of the files in a directory. It works recursively, going over each level of nesting and drawing a formated tree of all the contents. This way you can quickly glance over and find the files you are looking for.

There is also the option to filter the results using a simple regEx-like pattern:

According to its Wiki, Tmux is a terminal multiplexer, which translated in human language would mean that it's a tool for connecting multiple terminals to a single terminal session.

A Tmux Terminal With 3 Split Screens

It lets you switch between programs in one terminal, add split screen panes, and attach multiple terminals to the same session, keeping them in sync. Tmux is especially useful when working on a remote server, as it lets you create new tabs without having to log in again. 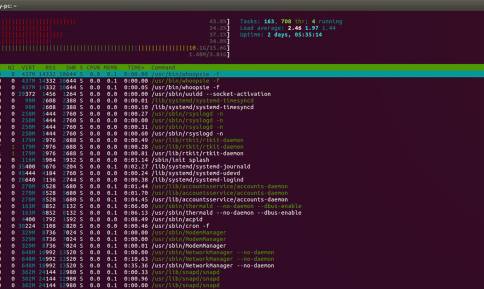 The du command generates reports on the space usage of files and directories. It is very easy to use and can work recursively, going through each subdirectory and returning the individual size of every file.

A common use case for du is when one of your drives is running out of space and you don't know why. Using this command you can quickly see how much storage each folder is taking, thus finding the biggest memory hoarder.

There is also a similar command called df  (Disk Free) which returns various information about the available disk space (the opposite of du).

Git is by far the most popular version control system right now. It is one of the defining tools of modern web dev and we just couldn't leave it out of our list.

There are plenty of third-party apps and tools available but most people prefer to access git natively though the terminal. The git CLI is really powerful and can handle even the most tangled project history.

If you want to learn more about git, we recommend checking out our tutorial Learn Git in 30 Minutes.

Tar is the default Unix tool for working with file archives. It allows you to quickly bundle multiple files into one package, making it easier to store and move them later on.

Note that most other formats such as .zip and .rar cannot be opened by tar and require other command utilities such as unzip.

If your OS doesn't have that version of tar, you can use gzip, zcat or compress to reduce the size of file archives.

Unix has several built in hashing commands including md5sum, sha1sum and others. These command line tools have various applications in programming, but most importantly they can be used for checking the integrity of files.

For example, if you have downloaded an .iso file from an untrusted source, there is some chance that the file contains harmful scripts. To make sure the .iso is safe, you can generate an md5 or other hash from it.

You can then compare the generated string to the one provided from the original author (e.g. UbuntuHashes).

Htop is a more powerful alternative to the built-in top task manager. It provides an advanced interface with many options for monitoring and controlling system processes.

The htop task manager in action.

Although it runs in the terminal, htop has very good support for mouse controls. This makes it much easier to navigate the menus, select processes, and organize the tasks thought sorting and filtering. 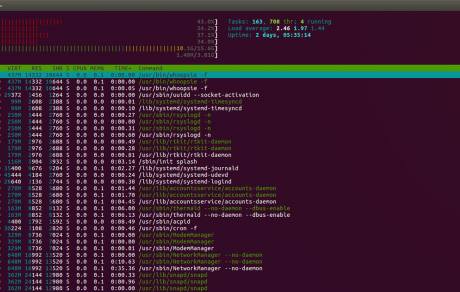 Links in Unix are similar to shortcuts in Windows, allowing you to get quick access to certain files. Links are created via the ln command and can be two types: hard or symbolic. Each kind has different properties and is used for different things (read more).

Here is an example of one of the many ways you can use links. Let's say we have a directory on our desktop called Scripts. It contains neatly organized bash scripts that we commonly use. Each time we want to call one of our scripts we would have to do this:

Obviously, this is isn't very convinient as we have to write the absolute path every time. Instead we can create a symlink from our Scripts folder to /usr/local/bin, which will make the scripts executable from all directories.

With the created symlink we can now call our script by simply writing its name in any opened terminal.

With the ssh command users can quickly connect to a remote host and log into its Unix shell. This makes it possible to conveniently issue commands on the server directly from your local machine's terminal.

To establish a connection you simply need to specify the correct ip address or url. The first time you connect to a new server there will be some form of authentication.

If you want to quickly execute a command on the server without logging in, you can simply add a command after the url. The command will run on the server and the result from it will be returned.

There is a lot you can do with SSH like creating proxies and tunnels, securing your connection with private keys, transferring files and more. You can read more in this guide.

Grep is the standard Unix utility for finding strings inside text. It takes an input in the form of a file or direct stream, runs its content through a regular expression, and returns all the matching lines.

This command comes in handy when working with large files that need to be filtered. Below we use grep in combination with the date command to search through a large log file and generate a new file containing only errors from today.

Another great command for working with strings is sed. It is more powerful (and more complicated) than grep and can perform almost any string-related task including adding, removing or replacing strings.

Many Unix commands, including some featured in this article, tend to get pretty long after you add all the options to them. To make them easier to remember, you can create short aliases with the alias bash built-in command:

The alias will be available as long as you keep that terminal open. To make it permanent you can add the alias command to your .bashrc file.

What is Webpack and how does it work

WebPack is basically a packer of modules or module bundler, but thanks to one of its components, the plugins, can be used as tasks runner, ie we can do tasks…

10 Javascript tips and tricks you should know

Javascript is the most widely used language in fullstack development thanks to the boom in recent years in libraries and frameworks such as NodeJs (backend) and React/Angular/Vue (frontend). However, regardless…

1. Syntax.fm  Full Stack Developers Wes Bos and Scott Tolinski dive deep into web development topics, explaining how they work and talking about their own experiences. They cover from JavaScript frameworks…

List of checks that you can perform on a linux server to try and figure out why it keeps going down Disk Space: df -h (Make sure you have enough disk space) Memory: free -m (Check…

About Varnish Varnish is an HTTP accelerator and a useful tool for speeding up a server, especially during a times when there is high traffic to a site. It works by…

After weeks of RC releases and a week's delay Linux 3.9, which packs a lot of new features, has finally been made available by Linus Torvalds. Last week Torvalds released the rc8…

A beginner’s guide to software vulnerabilities

What are software vulnerabilities The number of devices connected to the Internet is growing every day. And among those devices we find not only computers and smartphones, but also an ever-rising…

The BleedingTooth vulnerability and other Bluetooth security risks

Have you ever heard of BleedingTooth? And we do not mean the really disturbing looking mushroom which goes by this name and is totally real (we double checked) but one of…

The best tricks and features to master your Android Smart TV

We bring you a collection of the best tricks to squeeze Android TV, the Google operating system designed for televisions. You can find it on smart televisions of some brands,…

In today’s article we are going to talk about one of the features of the ES6 version(ECMAScript 2015) of JavaScript which is Spread operator as well as Rest operator. These features…

We use our own and third-party cookies to improve our services, compile statistical information and analyze your browsing habits. This allows us to personalize the content we offer and to show you advertising related to your preferences. By clicking on "Understood" YOU AGREE TO THE USE OF THESE COOKIES. You can also SET OR DISCONTINUE the installation of cookies by clicking on "Settings" or "Reject".