Python or Swift: Revealing Benefits and Drawbacks of Each Language and Their Differences


Programming languages constantly evolve to improve software performance and simplify developers’ lives. That’s why the programming languages’ ranking is so unstable. Popular languages change every year. While some become outdated and uninterested due to poor features, others get ahead of the ranking because of frequent updates and outstanding performance. There have been two languages that experienced a significant burst of popularity. They are Swift and Python.

According to PYPL, an annual ranking that depicts the programming languages’ popularity in the world rated Python as the most popular language in 2020. With a 30,34% share of overall users, it has a significant advantage over Java, the closest Python’s rival, which has only 17,23% share. As for Swift, it takes the ninth place in the list with a share of 2,17%.

In this post, We’ll figure out what noticeable features of these languages draw developers’ attention and which of them is better to learn. Let’s roll.

Python is a high-level object oriented-programming language that appeared in 1991. At first, this language was used for writing scripts and prototyping, but over time it began to be used for a wider range of tasks. As for now, developers use Python for machine learning, backend development, and even game development.

Python’s popularity is caused by the great number of its applications. According to the Python Developers Survey in 2019, the majority of developers (84%) use Python as their main language. The most popular use case for Python is Data analysis (59%). Web development and machine learning are also popular among Python developers. Here’s the chart with all Python use cases in software development.

So, what are the reasons to love Python so much? 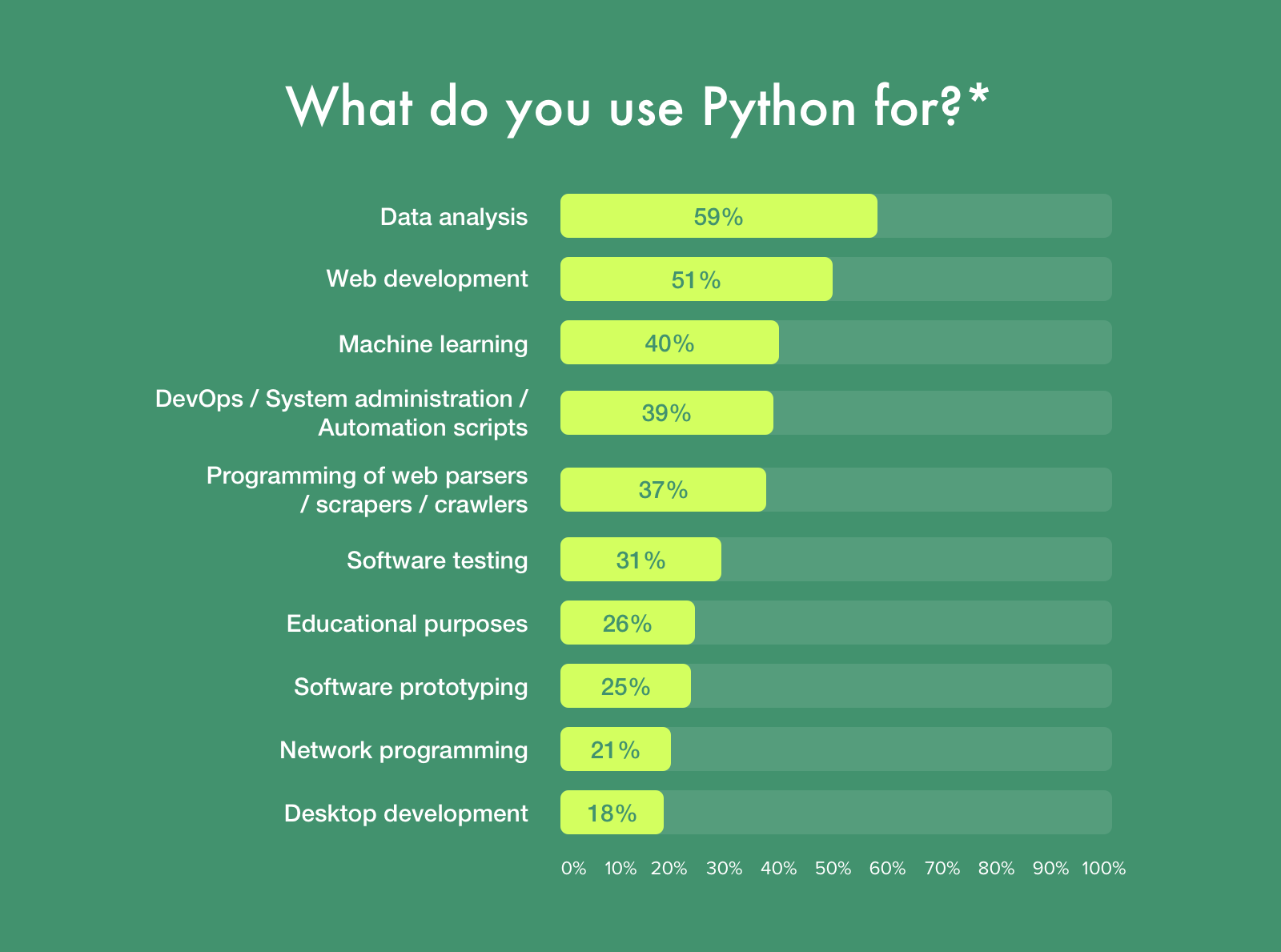 Python has a simple and easy-to-read syntax that helps newcomers to understand the language faster. Besides, with the right IDE, developers see all mistakes and style hints according to the PEP8 style guide. Thus, novice developers can write an organized code that will be understandable for more experienced engineers.

Python is available to all developers, and they can change its source code. Open source projects always gather a community of enthusiasts that constantly improve the language.

Python is a flexible tool that can be easily integrated with other programming languages like JavaScript and C++ and applications based on these languages.

If there’s a need to use another platform, Python is a perfect tool for transferring the code. This programming language is compatible with various platforms, so developers won’t have to rewrite the code from scratch.

Even though it seems that Python is a tool without any flaws, it still has its own weak spots. Let’s single out each of them.

As it was said before, Python is a versatile tool. However, this programming language won’t fit mobile developers due to its short capabilities. Still, for those who are ready to struggle, there’s a Kivy framework that is used for cross-platform mobile app development.

Python isn’t a strongly typed programming language. When declaring a variable, the language automatically determines its type automatically. Unfortunately, it can make mistakes sometimes that cause errors while building a project.

Python has some issues with memory management and consumption, so this language won’t perform great at solving tasks with intense memory usage.

As we’re clear with Python, it’s time to get a closer look at Swift. Swift is a language primarily used by iOS and macOS developers. Apple developed this language to replace Objective-C. When Swift was first introduced in 2014, Apple claimed that it would be modern, fast, and interactive. Is it really so? Let’s find out.

AS we’ve mentioned earlier, Python is much more popular than Swift. The reason is simple. Swift is a narrowly-focused language primarily used to create an app for iOS. While Python developers create web apps, machine learning, write scripts, and perform other activities, Swift developers focus on iOS, macOS, watchOS, and tvOS app development. Thus, developers who aren’t interested in these platforms have to search for other tools. Here are the iOS applications that were developed with Swift. 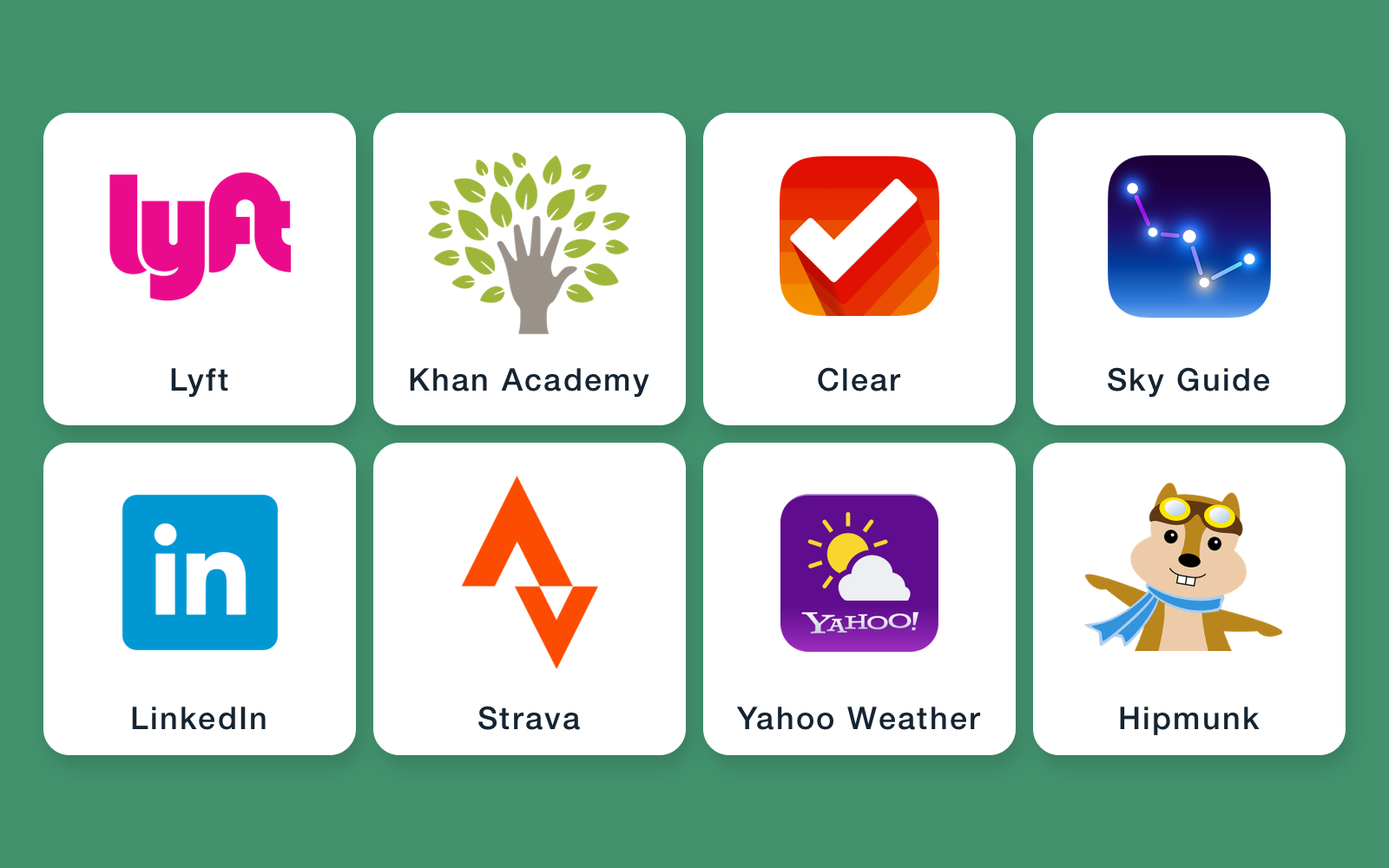 Now, let’s get to swift advantages.

Apple always delivers the best tools to their developers so that they could create high-performance software. Here’s the list of pros of the Swift language. 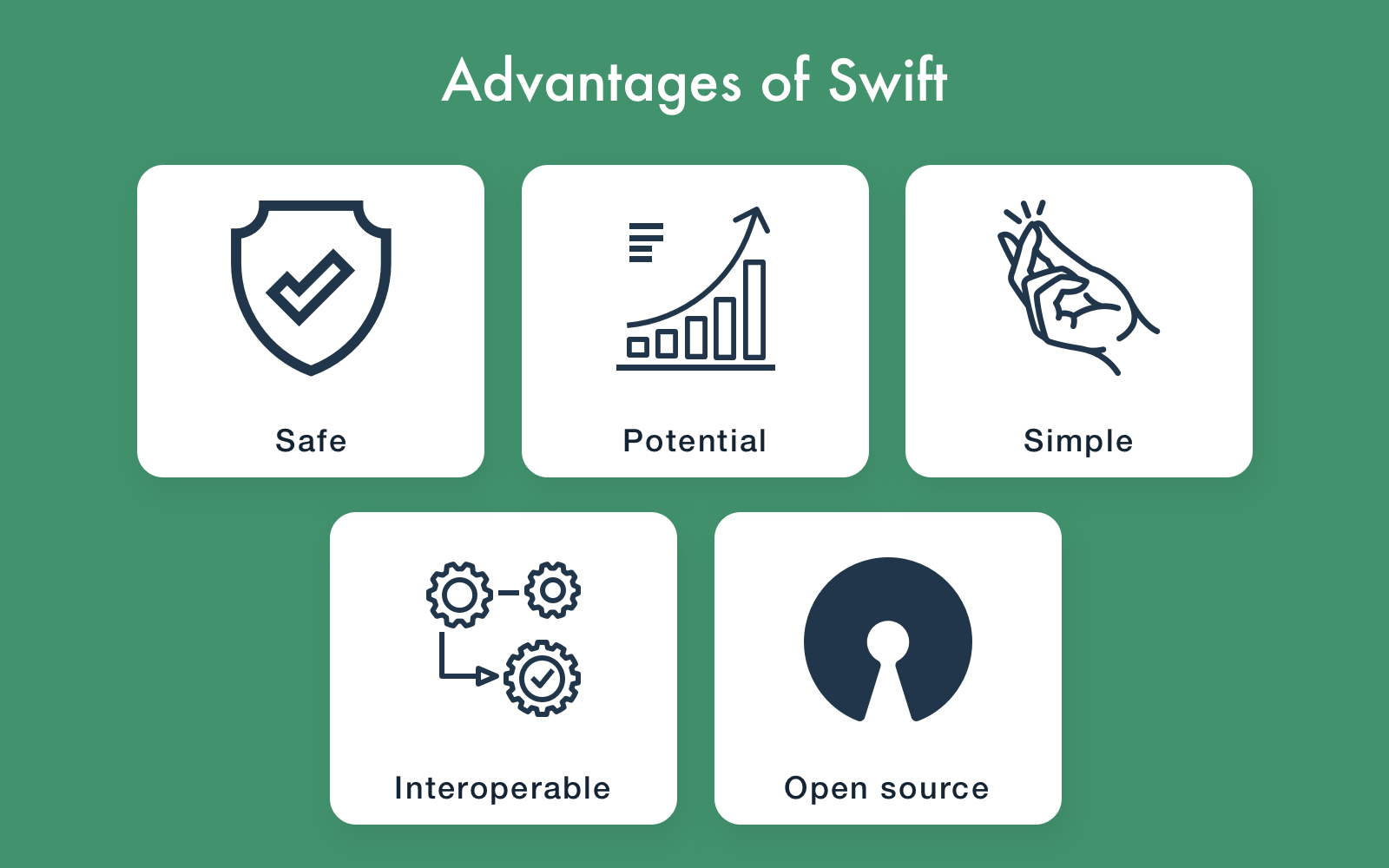 Minimalism is one of Apple’s key features. Swift wasn’t ignored by this feature as well. The syntax is clear for all developers, and this fact can boost the development process. The product becomes easier to document, and the project gains more room for collaboration.

Swift is a strongly typed language. That’s why, if some errors occur, developers can easily find the mistake before building the project if it’s linked to typing. Besides, null pointers help developers to avoid errors caused by null references.

Swift is an open-source language, as well as Python. A lot of companies made large contributions to Swift, so making the language accessible for everyone was a wise decision from Apple. For example, Swift is available on Linux now. Besides, IBM engineers created a Swift Sandbox that combines Swift with popular backend tools and allows engineers to deploy the project in the cloud. And it’s even more to come. The more developers’ attention Swift occupies, the more companies will invest their time and efforts into this language.

Swift is a relatively young language that still needs a range of improvements. Apple is working hard on Swift updates, but right now, we can highlight the following issues.

Due to the low popularity of Swift compared to other languages, companies often lack experienced Swift developers. Still, this is a driving factor for a lot of novice developers that are looking towards Swift. The demand for Swift developers rises, and the rivalry isn’t very intense.

Apart from talents, Swift also lacks native development libraries that are compatible with all versions. The majority of libraries work with previous Swift versions but don't comply with the newer ones.

As you can see, both of these languages are completely different even though they have some similar advantages. Python is a jack-of-all-trades tool. Developers use it both for complex data analysis tasks and for writing plain scripts. As for Swift, it’s a tool for developers that work on software for Apple products. Narrowly-focused specialists develop mobile and desktop apps predominantly. That’s why it’s hard to choose the best language of these two. Each of them can be used for different purposes and in different situations. That’s why you should choose the language based on your personal preferences.

What is Django and what is it used for

When we talk about Django, we refer to that framework that is used for any totally free and open source web application which is written in Python. Basically, it's a…

For date pickers, selecting menus is a common choice as they are simple to set up. But I suppose our customers deserve better after centuries of using MM / DD…

How to use the charCodeAt method in JavaScript

How to use the charAt method in JavaScript

Strings in JavaScript: What they are and how to use them

In this tutorial we are going to explain what strings are and how they are used in JavaScript. The tutorial is intended for people who are learning to program in…

Continuing with the set of articles that talk about internationalisation elements, like the previous one where we talked about relative dates in JavaScript, we will see in this one how…