Django vs. Laravel: which framework is better to use in 2021? Market share comparison

Let’s start by taking a closer look at these two frameworks and their peculiarities, then compare the popularity of Django or Laravel in 2020.

Django is a high-ranking, open-source web framework operating with the coding language Python. It encourages quick development and a straightforward, practical layout. Django is more suitable for those who want to implement such top-notch technologies as AI and ML. Django follows two patterns: MVW (model view whatever) and MVT (model view template). It is adaptable to almost any project in various industries and includes various ready-made feature packages. It can save developers much money and time due to its easy-to-read syntax.

Laravel is a web framework that runs on PHP and maintains the MVC (model view controller) architectural pattern. It involves lots of additional libraries that make the development process more simple, has many useful innovations, and supports the object-oriented approach. Laravel is supported by comprehensive documentation and detailed tutorials, which is a substantial benefit for beginners.

The top-level websites that trust Laravel are: UNION, Wikipedia, 9GAG, and ClosingBell.

Now let’s pay more attention to each framework’s specifics and see which one is better for 2021: Django or Laravel.

Pros and cons of Django

Pros and cons of Laravel

The market segment is an important point to consider when selecting the best framework for a new business project. Let’s see the Laravel and Django popularity chart and find out which one is more popular: 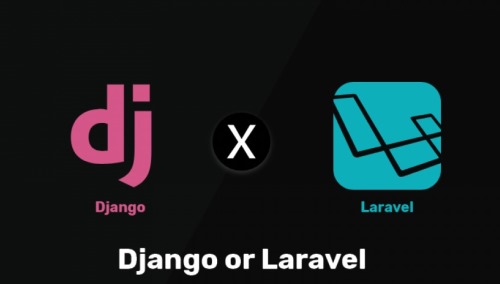 Django. According to statistics, Django has 0.13% of the market share, giving it the category’s 33rd position. There are 27,468 current websites developed with it.

Laravel. As the statistic shows, Laravel is the leader in market share competition, having 0.37% of the market. It is in the 19th position in the framework category. There are 79,543 current websites created with Laravel, and the trend is growing.

But let’s look at the other criteria, and maybe Django is not such a loser in this game.

Django is a leader in Education, Science, Jobs and Career, Food and Drink, Hobbies and Leisure.

Finally, let’s look at which countries employ these two frameworks.

Laravel is surpassing its competitor in 142 countries, including China, Brazil, India.

On the other hand, Django is a leader in countries like the United States, Spain, Russia, and 14 others.

To Sum it Up

Selecting the appropriate development framework is key to overall project success. Our article presented a survey of two leading web frameworks, Django and Laravel, and compared their market share. It is a reasonable criterion to rely on while choosing a framework. But the very first thing to consider is the specific demands of your project. No is no use in choosing the most popular framework if it doesn’t work for you. Hopefully, this article gave you insight on picking the right web development framework. We wish you good luck with your software development.

What is Django and what is it used for

When we talk about Django, we refer to that framework that is used for any totally free and open source web application which is written in Python. Basically, it's a…