Rare Earths: Here Is The 'Endgame' Threat of China That Led to The Immediate Freezing of The U.S. Ban in Huawei


The US move to put Huawei on its so-called Entity List — requiring American companies to obtain a government licence to sell to it — is a pivotal moment for the global technology industry. The action against the Chinese telecoms flagship has made global noise, monopolizing not only the political or economic news but also the all kind of debates, destined to create the maximum of general attention, beyond what will be the real extent of the damage caused.

The Chinese retaliation, on the other hand, was silent. So lacking in echo that it is still considered to be being processed, whereas it would have already been delivered to the White House in the form of a coded signal. Dissimulated, yes, but paradoxically so explicit and extreme as to have immediately brought the American institutions to more gentle advices, given that in the space of a few hours, the restrictions towards the colossus of the Dragon have gone from an immediately operative ultimatum to a three-month freeze. Apparently without reason, if not the predictable thud of the Nasdaq on the first day of negotiations of the week. But what really happened? While the echo of Google's action against Huawei was beginning to make its way around the world, in fact, President Xi Jinping stopped his journey. Exactly in the southern province of Jiangxi, where Jl-Mag is based, a leading company in its field but whose name does not involve reflections of interest as those raised by Huawei.

To understand its strategic nature, however, just look at this graph and write in full the company name of that company, what is missing from the words: Rare Earth Co. That is, the "rare earths", a material of fundamental importance for the tech industry, especially that related to microconductors. In fact, the basic ingredient for PCs, laptops, tablets. And smartphones. The equivalent of flour for a baker, in the world 2.0.

And the graph shows the reaction of the title of the Jl-Mag to the news of the visit of the President, a leap such as to reach quickly the limit of daily rise allowed by the Chinese regulators.The fact that the number one Chinese not only visited the company's headquarters but chose to do so accompanied by the vice-premier, that Liu He who is also chief negotiator with the U.S. on the issue of trade, has stimulated in many an easy reasoning: China is preparing for an unprecedented step, paralyzing the export of rare earths to the United States. In fact, it has brought the tech industry to its knees, and not only that, given that alternative supply channels are scarce (Africa in Chinese hands, the Asian Caucasus under Russian influence and Australia unable to meet US demand on its own), unreliable and based on volumes decidedly lower than those guaranteed by China. China alone exports 80% of the rare earths it needs to the United States. 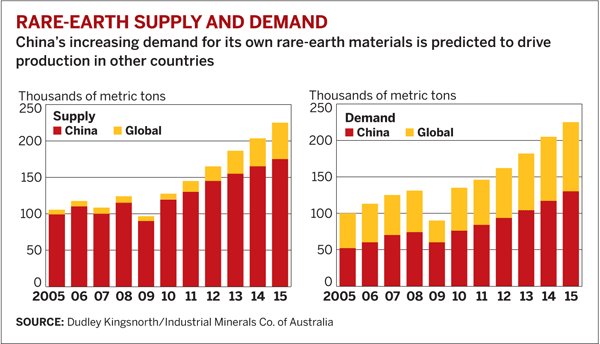 It is no coincidence that when announcing the increase in duties on imported Chinese goods worth 300 billion dollars, the White House took great care to exempt those real mineral treasures. China, on the other hand, in its first retaliation, had already announced the increase in duties from 10% to 25% on all U.S. products, avoiding strategically mentioning the subject of bilateral exemptions. In short, net of the soybean crisis that is bringing many Mid-West farmers to their knees, who were relying on the omnivorous Chinese demand (which was quickly redirected towards Mexico and Brazil), Beijing's real weapon seems to be about to be unleashed, in all its power. Definitely less mediatic than the ban on Huawei but much more systemic and lethal.

"The visit (by Xi Jinping, ed.) sends a warning signal to the U.S. that China could use rare earths as a retaliatory measure, net of a trade war in clear escalation. Something that, in the event of a further escalation of the clash, could also include the very limitation of the export of rare earths to the United States", declared the analyst of Pacific Securities, Yang Kunhe, when asked by Bloomberg. And to the questions of journalists regarding the Huawei case, a spokesman for the Chinese Foreign Ministry had answered in a perfidiously sibylline manner, inviting everyone "to be patient and wait for what will be the answer of the government and companies".

The visit to Jl-Mag appears even more strategic, since the company produces magnets that contain rare earths and are necessary for electric cars and airplane turbines. In short, on the day Ford announced 7,000 job cuts, a tenth of its entire workforce, a threat that the White House can certainly not take under its skin.

Now, if China really were to go beyond the symbolic and implicit threat of Xi Jinping's visit to Jl Mag, the scarcity of rare earths would bring much of the American economy to the edge of a crisis, while China would find itself with a gold mine in its hands.

In addition, Beijing's move could result in a perfect scapegoat, ensuring a media panic effect that would offer huge support to Donald Trump against the Fed, to get his much-needed rate cut.
In addition, while the umpteenth act of war against Beijing was taking place in Washington, Fernandina Beach, Florida, the head of the Fed was attending a conference on the banking system, at which, for the first time, he put the theme of the exponential increase in corporate debt in the United States in the spotlight. The numbers shown on the screen left no doubt about the critical situation in the United States.

If a key sector like HI-TECH is in danger of collapsing or suffering potentially lethal drops in production, the government must intervene. The war seems only at the beginning and is expected to be very long and full of twists and turns with double purposes that we will probably know only after events occurred.

In this years we see a surge in new tools and technology to make our marketing and creative lives easier. UX tools also continue to grow . Today we have listed 7…

How China Is Changing Internet

In China, a sheltered internet has given rise to a new breed of app, and American companies are taking notice. What was once known as the land of cheap rip-offs…