How to Turn An Android Device Into a Retro Game Console


If you like retro games and you want to set up your own system at home, a good way to do it is using Android. From emulators for Mega Drive, N64, GBA, PS1 or Super Nintendo, to other systems such as MAME, all of them are available in Android app format. And the truth is that they are verry practical.

In addition, from some time to this part, we have also been able to see official relaunches of retro games in the Play Store, such as the Sega Forever classics, or the Final Fantasy and Dragon Quest sagas. Having said that, let's see how we can turn our phone, tablet or TV Box into a sort of Android console for retro games.

The video games of the 80s and 90s are not usually very demanding, so if we have an old Android phone we can give it a new life if we decide to use it to connect to the TV and use it as a video console.

Things we will need

To assemble the complete system we will need the following elements:

If we have a TV Box it is even easier, as we will not need any additional cable or adapter to connect the Android device to the TV.

Once we've got hold of all the components of our "Android console", it can take the longest time to find the right emulators. If you've heard of retro platforms, you'll probably have heard of the fabulous Recalbox. Unfortunately it is not a solution that is available on Android, although we can find multi-platform emulators such as RetroArch, which support several consoles at the same time.

To achieve a proper gaming experience we will need a Bluetooth gamepad. We can take advantage of the PS4 controllers -see HERE to see how- or buy an Android-compatible controller. Nowadays there are manufacturers such as 8Bitdo that do real wonders, with retro gamepads of the highest quality and aesthetics. Now that we have the emulators and the gamepad, all we need to do is get hold of a few games. They are what is usually known as ROMs, which is basically the game compressed in a ZIP or RAR file.

It is worth remembering that making backup copies of games or ROMs is legal as long as we are in possession of the original cartridge or game. Likewise, downloading ROMs of games that we do not have in physical format is completely illegal.

Alternatively, we can also "rip" our own ROMs using a device such as Retrode, thanks to which we can extract the content of our cartridge and download it to a PC via a USB connection.

That said, there are also freeware ROMs from independent developers that also do not break any copyright, and in some cases are really good.

Retrogaming in Android through KODI

Another alternative to play video games on Android is KODI. From version 18 of the application, it incorporates a new tool called Retroplayer. 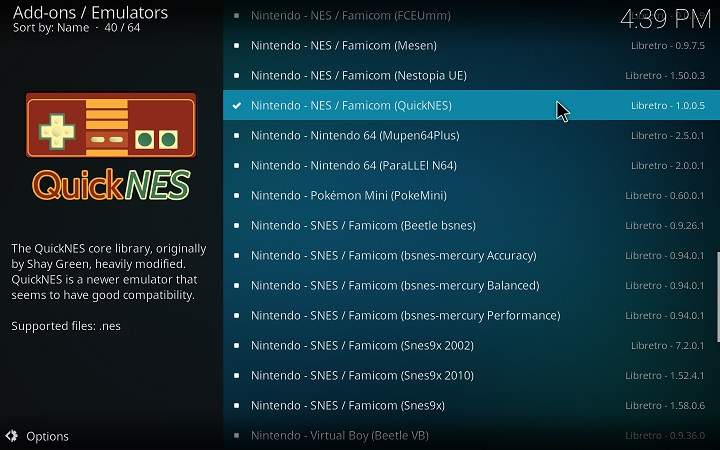 How to configure the RetroArch Android emulator suite

The idea of using RetroArch is to have a single central tool that allows us to emulate all the games. This way we can do everything from one place without having to constantly open and close apps.

There are currently 2 versions of RetroArch, a standard version for older devices and a 64-bit version for more modern Android terminals. Therefore, it is advisable to check which version we need before installing the app. Normally we will notice it right away, because if our device is not compatible, a clear message will appear when we try to download it from the Play Store.

Once we have the application installed, RetroArch will ask us for permission to scan our internal memory. In this way, it will detect the folders where the game ROMs are located.

Next, we will proceed to download the emulators that we will use. To do this, we will "Load core -> Download core" and select the emulators we are interested in. There are more than fifty to choose from.

Finally, return to the main menu and click on "Load content". We look for the ROM of the game we want to load with the corresponding emulator, and we will be ready for a good retrogaming session.

Among its various features, RetroArch has an online update tool, online multiplayer for those games that support it, and above all, the possibility of saving the game. This works even with games that originally did not have a save function, allowing us to stop and resume games when it is most convenient for us.

Another emulation suite that is also available in Android is ClassicBoy. It supports up to 8 different emulators, and has customizable controls, although in its free version it does not give the option to save the game. Something we can solve if we get the premium version, which costs about 3.5 euros.

Personally I think that in general it is not as good as RetroArch, but it has some interesting things like support for up to 4 players, gesture control and accelerometer.

Finally, mention that there is also the possibility of installing specific system emulators. For example, in recent months Citra, the Android emulator for the classic Nintendo 3DS, has become really popular. On the other hand, if the only thing we are interested in is playing 8-bit NES titles then we should definitely install Nostalgia NES, an Android emulator that has been struggling for years and works really well. Likewise, if we prefer the old-fashioned arcade games, there is nothing like trying MAME4droid, another of those emulators that make school.

In short, Android has emulators for most of the classic systems, some better than others, but there is no doubt that there is a community that keeps bringing out new things to make the most of the playable part of our mobile devices.